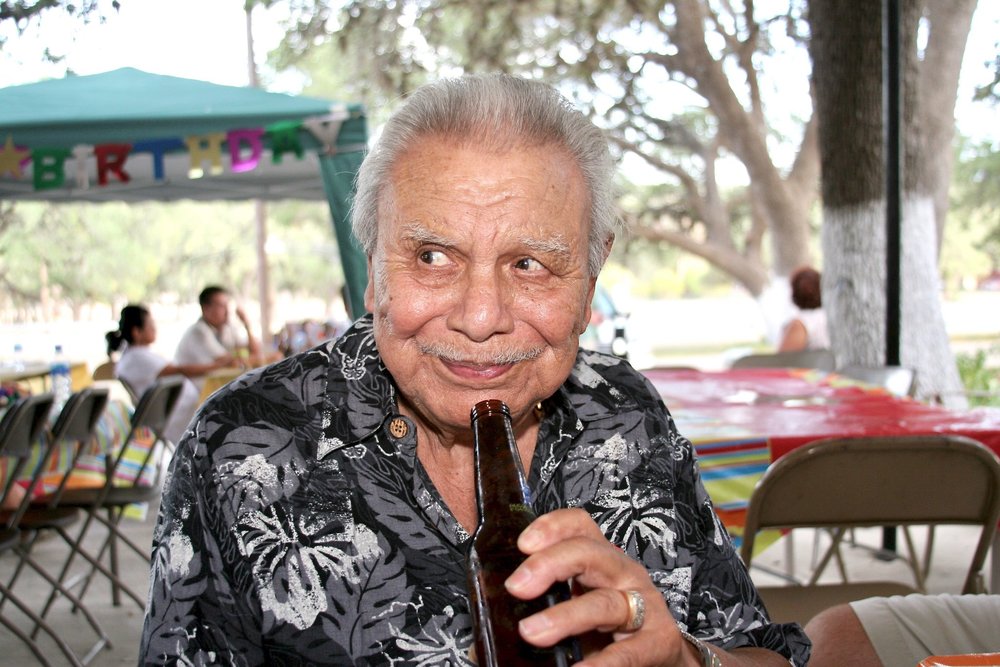 Our beloved Henry Garza, age 98, resident of San Marcos, Texas was called by our Heavenly Father on Friday, May 22, 2020. He was preceded in death by his loving wife of 32yrs., Julia S. Garza; daughter, Alma G. Pestana; son, Henry Garza Jr.; parents, Marcos & Fidela Garza. At the age of 16, Henry joined the Civilian Conservation Corp he served in Colorado where he saw snow for the 1st time. He also served at Lockhart State Park (Lockhart, TX) working as a mortar-man during construction of pool. Henry wanted to join the United States Navy after hearing about Pearl Harbor. He enlisted in 1942 and retired in 1962. Onboard USS Calhaun (DD801) Henry saw action from Guadalcanal, Iwo Jima (where he witnessed the raising of the flag on Mount Suribachi) and Okinawa (where his ship was sunk). He married his second wife Julia Soto on October 22, 1962 and moved his new family to New London, CT. where he retired from the Navy and was a barber at John’s Barber Shop in Groton, Ct. Mr. Garza and his wife Julia resided in Groton, CT. for thirty years and returned to San Marcos, TX. After their retirement. Henry and Julia were a successful business team. They ran some of the most popular restaurants in the area: Coachman’s Pub, Horizon Restaurant at the New London/ Groton Airport, El Sombrero Mexican, El Rancho Mexican Restaurant, and El Patio at Ocean Beach Park. Their first venture was the Coachman’s Pub right down the strip from John’s Barber Shop. During the day he would cut hair and afterwards he would join his wife Julie to help her with the bar. They both retired to San Marcos, TX in 1990. His father had a saying that he took to heart: “Cielo Azul lo que no mas falta es piso.: Which means Blue Sky what is missing is the ground. He is survived by his children, Larry R. Garza, Daniel L. Garza, and Rosalie Haggerty; brothers, Freddy Garza, Ignacio Garza, and Carlos Garza; sisters, Beatrice Sanchez, Dora Rodriguez, and Delia Villareal; grandchildren, 4; great grandchildren, 5; and with other loving family and friends. DUE TO COVID-19 ... CERTAIN RULES STILL APPLY … Visitation will begin at 3:00 p.m. – 7:00 p.m., Thursday, May 28, 2020 with Recitation of Holy Rosary held at 7:00 p.m., Los Angeles Funeral Home, 300 Cheatham St., San Marcos, Texas. Mass of Christian Burial will be held at 10:00 a.m., Friday, May 29, 2020 at St. John Catholic Church … 624 E. Hopkins … San Marcos, Texas … Rev. Father John Boiko will officiate. Interment will follow at San Marcos City Cemetery in, San Marcos, Texas. In lieu of flowers please make donation to your local food bank due to current events during this hard times. Please visit www.losangelesfh.com to offer condolences and to send flowers.
To plant a beautiful memorial tree in memory of Henry Garza, please visit our Tree Store
Thursday
28
May

Share Your Memory of
Henry
Upload Your Memory View All Memories
Be the first to upload a memory!
Share A Memory
Plant a Tree